Milkman: Creating processes as any currently logged in user

One of the problems with using PSEXEC from Metasploit (any of the psexec modules) is that it runs as SYSTEM. What’s the problem with that? Isn’t SYSTEM god mode? Ya, and normally I’d agree that it’s the best level to have, but the defenses these days have gotten better, and getting direct connections out is pretty rare. That leaves proxies, and as you know SYSTEM doesn’t get any proxy settings.

Here is a blog post that I made about setting the proxies for SYSTEM but leaving settings like this set is not only sloppy but hard to clean up.

Along comes RunAsCurrentUser-2.0.3.1.exe I found this gem by messing up a search on google for RunAsUser. Found it on this IBM support post. 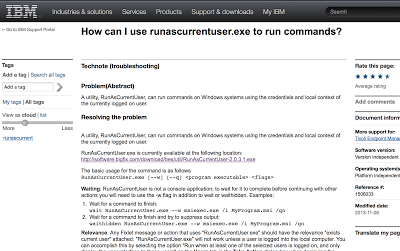 Here is a mirror uploaded to my Post Exploitation repo: https://github.com/mubix/post-exploitation/blob/master/win32bins/RunAsCurrentUser-2.0.3.1.exe

This binary takes a path to another executable as an argument. It then finds the currently logged in user and starts the provided executable as that user. AWESOME! This basically solves the whole PSEXEC->SYSTEM no-proxy settings issue. And it’s created by a legitimate company for legitimate reasons? w00tw00t. Game on!

So I set to try and figure out how this binary did it’s magic. As I’m not much of a reverse engineer I uploaded it to VirusTotal so I could take a look at it’s insides (plus, double check to see if it was being detected as malicious at all).

As far as I can tell the important pieces are the Windows API calls ImpersonateLoggedOnUser, and CreateProcessAsUserA. I set to trying to reproduce what it did in AutoIT (awesome stuff if you have never checked it out). I couldn’t quite get the API calls right, so I decided to give C++ a shot. Turned out to be pretty simple. I present to you “Milkman”:

This program (once compiled) takes one argument (or none at all) and runs calc.exe for every instance of the process you tell it to. If you run it without arguments it auto selects explorer.exe. So if you create a service:

It will start up every time the computer starts, which is completely useless, since there won’t be any users logged in at that point, but you get where this can go. Features to add to this at point are:

Thoughts? What would you like Milkman to do, or what use case do you think a tweak would make it work better for? Leave a comment below.